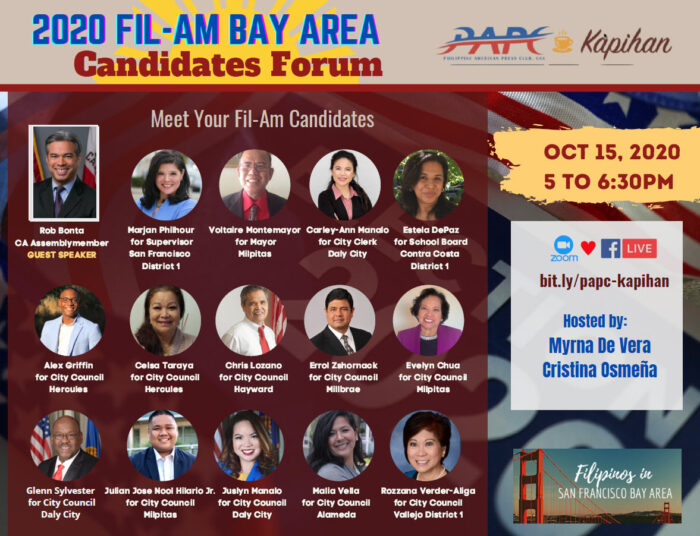 Filipino American Candidates get a push from the PhilAm Press Club-USA.

The Philippine American Press Club-USA is proud to host the last of its 2020 Kapihan/Forum Series at a – “Meet and Greet 14 Filipino American Candidates in the Bay Area” on Thursday, October 15, 2020 at 5PM-6:30PM. Guest Speaker is the Honorable Assemblyman Rob Bonta (Ca). Kapihan Co-Hosts are Myrna Lardizabal De Vera, Former Mayor of the City of Hercules, and Cristina Osmeña, Columnist, Philippine News Today. Zoom meeting link at bit.ly/papc- kapihan

According to the 2017 American Community Survey of the Census Bureau, there are an estimated 500,000 Filipinos in the Bay which represents 12% of the entire 4 million Filipinos in the United States; and 30% of the Filipino residents in the State of California. Filipino Americans compose the largest Asian American sub-group in California. However, Filipinos in the past have been described as “invisible residents.” Hopefully, this year, that will be a thing of the past. The community needs to be more visible not only in California but nationwide.

Let your voice be heard. Deadline for registration is October 19, 2020. Register to vote or check your status at https://covr.sos.ca.gov/