Officers, members and supporters of the PAPC join awardees and speakers at closing of award ceremony. INQUIRER/Jun Nucum

SAN FRANCISCO – Speakers at the 2017 Plaridel Awards, held October 5 at the Philippine Consulate’s Kalayaan Hall, challenged Filipino American media practitioners to be true to their calling as credible and dependable journalists.

Kkeynote speaker Pati Navalta Poblete was an editor at the San Francisco Chronicle and two-time nominee for the Pulitzer Prize. INQUIRER/Jun Nucum

Ascalon told INQUIRER.net, “This recognition makes you feel that you have done something right and it further encourages you to give excellent service to our kababayan,” Ascalon shared. “To me what is important is that you have to have the heart and to have the mindset that you are here to serve. Work hard and explore ways to serve even better.”

Call for fight vs. fake news

As he congratulated the awardees Consul General Henry Bensurto Jr. called on PAPC members to “go back to the core value of their profession, to remain steadfast in working with integrity and honesty in the day and age when fake news abounds.” 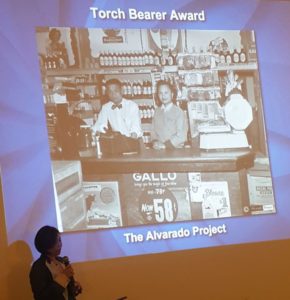 Janet Alvarado speaks for the Alvarado Project, which was given a torch bearer award for photo journalism. The project consists of 3,000 negatives of photographs of Filipinos in the mid-20th century taken by Janet’s father, Ricardo Alvarado. INQUIRER/Jun Nucum

The call against fake news was seconded by the night’s keynote speaker, Pati Navalta Poblete, who was news editor and columnist at The San Francisco Chronicle and a two-time Pulitzer Prize nominee,

“At the heart of being journalist is truth. At the heart of it are stories that you hope will raise awareness, effect change and maybe will hopefully inspire. At no time in history has this been given more meaning both here and in the Philippines,” Poblete declared. “More and more we are facing leaders who question the validity of our craft labeling it as fake news because of their fear that the truth will prevail, that the people that will read these stories will unite and call for change.” 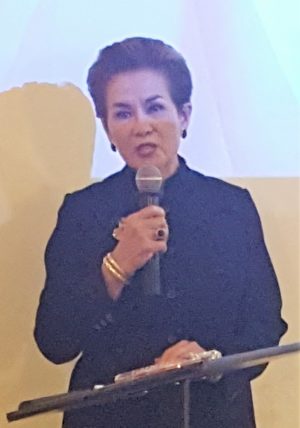 Poblete’s son, Robby. was shot and killed in broad daylight three years ago causing Poblete to suffer from post-traumatic stress disorder (PTSD). She slowly recovered after beginning to write again and putting up a foundation named after his son.

“There are more than 3,800 stories that must also be told in the Philippines, more than 3,800 stories of loved ones who were victims of extrajudicial killings,” said Poblete. “The difference between their stories and mine is that my son’s killers await trial while there is no justice for the victims or their families in the Philippines,” lamented Poblete. 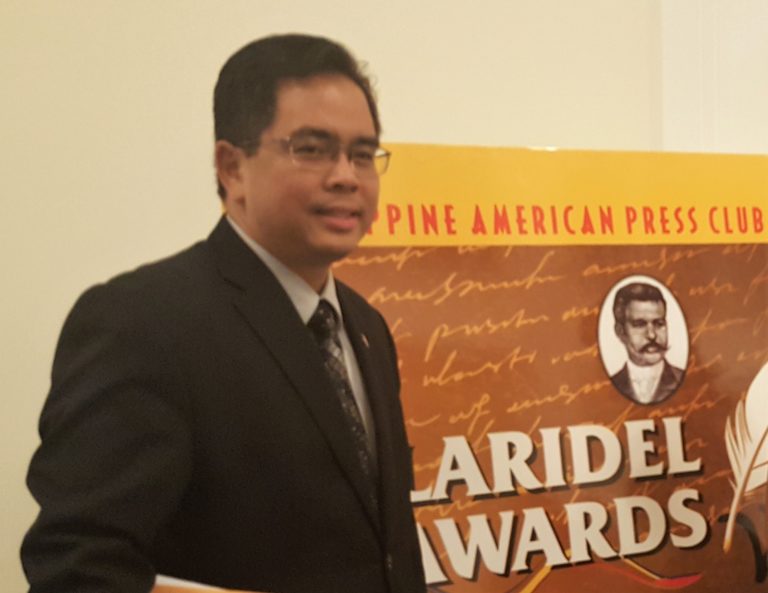 Deputy Consul General Jaime Ramon Ascalon was given the torch bearer award for public service for his dedicated work of six years in the Philippine Consulate General in San Francisco. INQUIRER/Jun Nucum

The Robby Poblete Foundation seeks to reduce gun violence by collecting unwanted firearms through gun buy-back and then transform them into art work. It also lines up vocational skills program for youth and young offenders “who should be offered ways for them to rebuild their lives because no one is beneath redemption.”

PAPC President Esther Chavez said of the event, “We never tire of meeting Filipino American journalists all over the U.S. We are happy that his has become an oasis of sorts where Fil-Am journalists are acknowledged for their work.”

Recipients for the first Ness Ocampo Memorial Radio Award for Programming were FilAm Radio KEST 1450 AM represented by Bryane Ucol and Andy Rubio which broadcasts from Daly City; and KPMW Mix 105.5 represented by Cecille Piros from Maui, Hawaii. Ness Ocampo was a radio personality for over 40 years. He passed away last year. His daughter, Caroline Ocampo and wife, Lita, honor him with this memorial award in his honor.

PAPC president, Esther Misa Chavez, announced that the 2018 Plaridel Awards will start receiving entries beginning June 15, 2018. Deadline for submission is on July 30, 2018. She invited all journalists of Filipino descent throughout the US to join the Plaridel Awards, and network with its members coast to coast for a more robust dialogue about its growing community. For more information, visit the PAPC website at www.papcusa.org