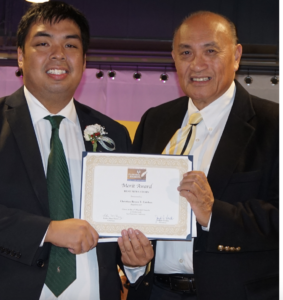 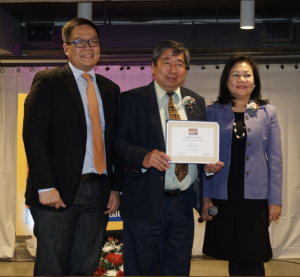 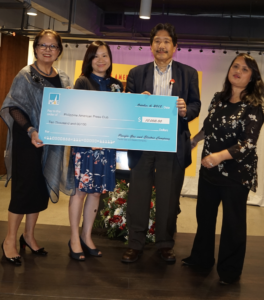 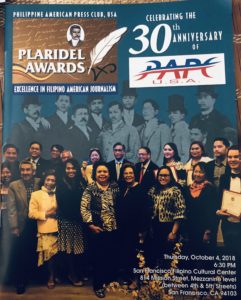 Oct. 4, 2018, San Francisco, Ca: Their souvenir cover said it all. Superimposed on a 1900 sepia colored photograph of the La Solidaridad’s esteemed writers and co-founders, was a similarly posed group photograph of the 2017 Plaridel Awards recipients, organizers and community leaders. Esther Chavez, past president of PAPC and founder of the Plaridel Awards explained that by combining the two photos, she felt the “inspiring presence of those who came before us as we celebrate the 30th Anniversary of the organization.”

Philippine American Press Club USA held its 2018 Plaridel Awards excellence in Filipino American journalism at the newly opened San Francisco Cultural Center on Mission Street. The Torch Bearer Awards established in 2011, is an integral part of The Plaridel. It acknowledges individuals “for selflessly dedicating immeasurable time and boundless energy towards projects and activities that enable the Filipino-American spirit to thrive.” Honoree for Community Leadership was Professor Dawn Bohulano Mabalon, (posthumously honored) historian, author and tenured professor of Asian American Studies at the San Francisco State University. She authored “Little Manila is in the Heart: The making of the Filipino American Community in Stockton, California.” Stockton, her birthplace, and one of the first thriving Filipino communities in California, was at the core of her studies. She also wrote extensively on Filipino foodways. The trophy was received by her husband, Jesse Gonzales.

Bobby Caina Calvan, received the Torch Bearer Award for Outstanding Journalism, a veteran journalist who covered all 50 states in the nation and several countries on his beat. He was until recently, the Local Collaborations Editor of Reveal of the Center of Investigative Reporting based in Emeryville. One outstanding program he led was a yea-long Ford Foundation-funded program to boost coverage of communities of color and LGBT issues in Nebraska. Calvan currently mentors and coaches reporters and editors on strategies to be more inclusive in their reporting.

PAPC’s First Youth Journalism Scholarship Grant was awarded to Catherine Oriel a journalist for her high-school paper, and youth adviser and blogger at “Look What SHE did!”, an organization based in Los Angeles, California that spreads positive stories about the unsung accomplishments of women. She is now a freshman at the George Washington University in Washington, DC majoring in Journalism.

To top the evening off was a $10,000 grant given to the press club for Fire Safety Education from the Pacific, Gas & Electric Company. There to present the check were Fiona Chan and Tony Kheng from their Communications Department.

The Plaridel since its inception in 2012 has given out 133 trophies to outstanding Filipino American journalists. This year’s winners in their respective categories were the following:

Best Commentary – The Plaridel went to Emil Guillermo of Inquirer.net for “Filipinos here first to America.” Merit Award went to Perry Diaz of FilAm Star for “Give peace a chance to grow.”

Best International Story – The Plaridel went to Rene Astudillo of Positively Filipino for his piece “Will Philippine jeepney soon be extinct.t” Merit Award went to Rodel Rodis of Inquirer.net for “Why China will declare war if PH drills for oil.”

Best Food Story- The Plaridel went to Rae Ann Ocampo Varona of Asian Journal for her article “What’s on your FilAm table for thanksgiving.”  Elizabeth Ann Quirino of Positively Filipino received the Merit Award for “Tupic from Tarlac.”

Best Entertainment Story- The Plaridel went to France Viana of Positively Filipino with her “Myth, Magic and Madonnas.” Lisa Suguitan-Melnick of the same publication won a Merit Award for “Incarcerated 6×9 on the cell-lular level.”

Best Profile Writing – Titchie Carandang-Tiongson and Erwin Tiongson of Positively Filipino won The Plaridel with their “The Untold story of Nina Thomas: The American woman who would have been First Lady of the Philippines.”

Rey dela Cruz of Positively Filipino won the Merit Award for his “Happy Beneath the Sea.”

“Where sexual revolution and civil rights meet ‘Me Too’.”

Best Photojournalism Award- Wendell Alinea of Philippines Today won a Merit Award for his photograph entitled “Pacquiao stunned, dethroned by Australian Horn but hailed by many who said he won.”

The 2nd Ness Ocampo Memorial Award for Radio/Podcast was won by Emil Guillermo with his “Emil Amok’s Takeout” interview with “Ben de Guzman on the Congressional Medal of Honor for WWII Veterans.”