SAN FRANCISCO — The Philippine American Press Club USA is accepting entries for its Annual Plaridel Awards for Excellence in Filipino American Journalism, which is now on its sixth year.

Established in 2012, The Plaridel was created to inspire and empower local journalists by acknowledging and celebrating outstanding journalism. In just five years from inception, The Plaridel has become a benchmark among Filipino American journalists in rating news and contents nationwide and is now considered an “institution.” With the caliber of the judges chosen for The Plaridel, PAPC is confident that winning articles are outstanding in content, form and style among other aspects of good journalism. 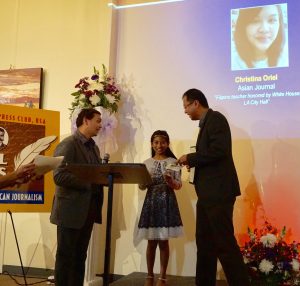 Entries for this year’s competition must have seen print or been broadcast through a Filipino American or mainstream media anywhere in the U.S. between June 1, 2016 thru May 31, 2017. Deadline for submission is July 31, 2017.

The Awards Ceremony will be held on Friday, October 6th at the Kalayaan Hall of the Philippine Center on Sutter Street in San Francisco. Trophies will be given to the winners with the best written articles or reportage that provide a unique perspective on the issues and concerns of Filipino Americans or the community at large.

Awards will be given to the best stories and articles that provide unique perspective on the issues and concerns of Filipino Americans. Categories for print and online articles include Investigative Story, News Story, Personal Essay, Feature Writing, Profile Writing, Commentary or Editorial Essay, International Reporting; Entertainment, Food, and Sports Stories; and Youth Voice (age 16 – 26.) For Broadcast TV- Community Reporting and Personality Profile. For Radio:  Community Programming. And last but not least, Photojournalism and Tourism stories. There is a maximum of two articles per category. Submissions must come from the journalists themselves and not the media organization. 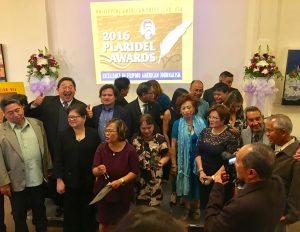 Philippine American Press Club, U.S.A. (PAPC) is now on its 29th year of providing a venue for its members to network and affirm their journalistic endeavors as they chronicle the lives and times of their compatriots, promote and share their culture and history, champion their causes and provide a vehicle where readers/listeners can voice their concerns and ideas for the betterment of the community and society at large.

The name Plaridel was chosen in honor of Marcelo H. Del Pilar, a Filipino patriot, journalist and publisher who brought his craft and zeal as an expatriate in Europe in late 1800s. He was a prolific writer who kept his constituents abreast of the goings on in their expatriate community as well as in their homeland. In him PAPC has found a hero – a person to emulate and an inspiration to Filipino American writers and publishers everywhere, who continue in their journalistic aspirations and service to their constituents in the new land they now call home.

The Philippine American media have been providing news and information to the community for more than 50 years. At present, total monthly circulation of the combined major publications in print/online and broadcast is approximately 3 million nationwide. For more information on The Plaridel Awards please visit www.papcusa.org

One thought on “2017 Plaridel Awards Call for Entries”